For assistance, comments, or questions, contact Olivier Petinaux, Senior Manager, Distance Education and E-Learning, elearning@facs.org or call us at 1-866-475-4696

The American College of Surgeons Division of Education and Ciné-Med have developed the interactive Multimedia Atlas of Surgery: Hernia Surgery Volume.

The text opens with an illustrated outline of the hernia anatomy and a chapter on early history of hernia in a discussion on Edoardo Bassini's operative technique. The balance of the text addresses specific types of hernias and relevant repair techniques as outlined below. It also includes an anatomy quiz for laparoscopic inguinal hernia repair.

Individual titles are available for purchase. Select one below.

Although the current types of mesh for hernia repair have been used for many decades, it is only in the past several years that we have begun to understand the interaction of these materials in the body. Although thought to be inert, it is now recognized that all materials can undergo changes in the body. These changes can be variable and lead to a wide range of effects to the mesh, and the body. In some patients these effects can lead to complications such as recurrence and chronic pain. This chapter will show many of these mesh changes and complications. Unfortunately, we are not yet at the point in our evolution of learning about materials' interaction with the body that we can predict which patients will do better, or worse, with which types of mesh.

Laparoscopic treatment of complications from mesh placement should only be dealt with by experienced operators, particularly when the complication occurs following inguinal hernia repairs. Two problems have been noted when viewing previous laparoscopically repaired hernias. In some cases, the mesh did not stay where it was originally placed. Others have observed substantial mesh contraction, sometimes to a very small size. In general, mesh contraction is common, although the degree of mesh contraction can be quite variable and not yet predictable in a single patient. Wide overlap and secure fixation attempts to minimize the consequences of mesh contraction in hernia repair. Both contraction and migration of mesh can lead to a recurrence. The following group of videos shows various meshes that have migrated and/or contracted after being placed in the body.

Video 1 demonstrates the size of a pristine mesh placed over the left groin in the extraperitoneal space. This covers the entire myopectineal orifice fairly well.

For inguinal hernia repair, the mesh is relatively small and placed within groin layers. This may impact the degree of contraction. Tissue ingrowth is usually aggressive and this could lead to significant contraction from myofibroblasts during the acute and subacute healing phase.

In the patient with a right groin inguinal hernia recurrence, the mesh (similar in type to the dual-layered heavyweight polypropylene shown in the previous video) has contracted about 90% from its original size. (Figure 1) 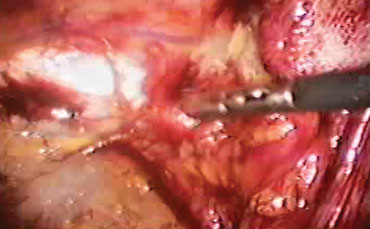 Video 3 shows left groin recurrence in which the same type of mesh has contracted about 75% from its original size. In this patient, the recurrent hernia presented about a year after the original operation.

The patient in Video 4 had postoperative groin pain. The mesh can be seen contracted inferior to the tacks, which no longer penetrate the contracted mesh. (Figure 2)

In the case in Video 5, after taking down adhesions, it was apparent that this polytetrafluoroethylene (PTFE)/polypropylene composite mesh had contracted and allowed for recurrent herniation of abdominal contents around both sides of the mesh.

In Video 6, the all-PTFE mesh had contracted, allowing for a small hernia recurrence at the site of the superiorly-placed transabdominal wall suture. Acting like a seton as the mesh contracted, the suture apparently cut through the fascia, causing a symptomatic hernia recurrence.

With contraction of this PTFE/polypropylene mesh, a tack was pulled out of the abdominal wall, creating a small hernia recurrence.

In Video 8, a PTFE contracted mesh was found within a large hernia defect. Multiple Swiss cheese type defects were found around the mesh within the single large defect. 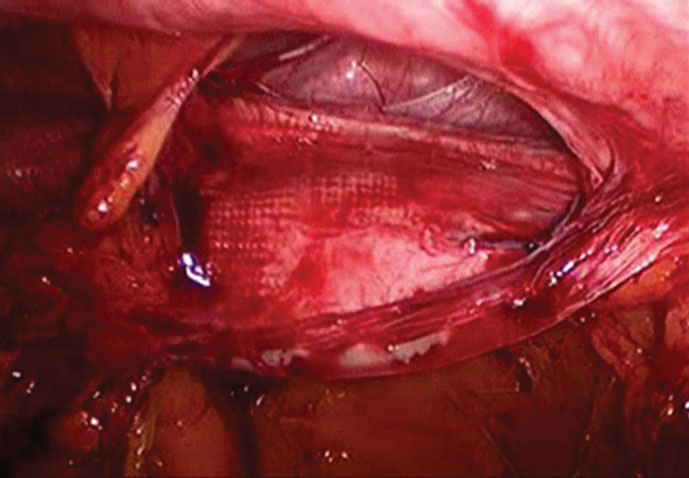 Video 10 demonstrates another recurrent ventral hernia due to a contracted PTFE/polypropylene composite mesh. There are also adhesions to the mesh and a seroma above the mesh, which is drained.

After removal of a contracted PTFE/polypropylene composite mesh, the mesh contraction and deformity is demonstrated outside of the patient.

This marks the end of the partial sample chapter

With Spigelian hernias, however, this is not the case.

In 1645 the Belgian anatomist Adriaan van der Spieghel, also known by his Latin name Adrianus Spigelius (Figure 1), first described the curved or semilunar line which now bears his name.1 The eponym Spigelian hernia was first used in 1764 by the Flemish anatomist Josef Klinkosch to describe a defect in the semilunar line of Spigel.1 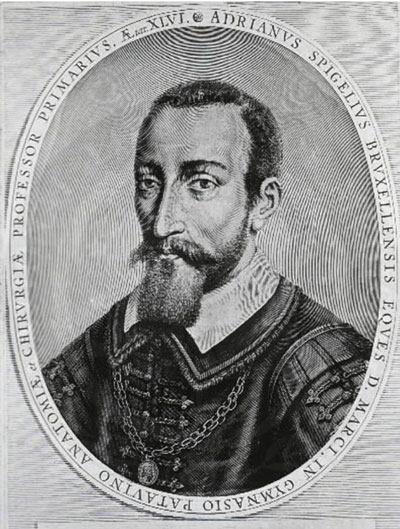 Congenital Spigelian hernias have been reported but, by and large, these are believed to be acquired defects.4 Penetration of preperitoneal fat through the Spigelian aponeurosis with subsequent interdigitation between the fibers of the overlying muscles is believed to be a possible etiological cause of Spigelian hernias.4,9 Cranial to the umbilicus, the aponeuroses of the internal oblique muscles and the transversus abdominis muscles cross each other at oblique angles.

Below the umbilicus, these fibers run more parallel and may be more prone to separation.The transversus abdominal muscle has also been noted to contain musculoaponeurotic defects. Therefore, any condition which increases intra-abdominal pressure may contribute to the formation of a Spigelian hernia through these defects.2

In an upright position, the intra-abdominal pressure is highest in the lowest portions of the abdomen. At the same time, the Spigelian fascia is broadest in the lower abdomen. These factors may contribute to the etiology of Spigelian hernias.2

Aponeurosis - A tendon distributing over a large area. A thin, but strong sheet of connective tissue which is a continuation of abdominal muscle toward the opposite side.

Fascia - The connective tissue ensheathing each muscle and its aponeurosis.2,4

Spigelian hernia - This is a hernia of the anterior abdominal wall whose origin lies within the Spigelian aponeurosis above the inferior epigastric vessels and the level of Hesselbach's triangle.

Low Spigelian hernia - A hernia of the anterior abdominal wall whose origin lies within the Spigelian aponeurosis but occurring below the inferior epigastric vessels within Hesselbach's triangle.

The relevant anatomy of the anterior abdominal wall is depicted in Figure 2. 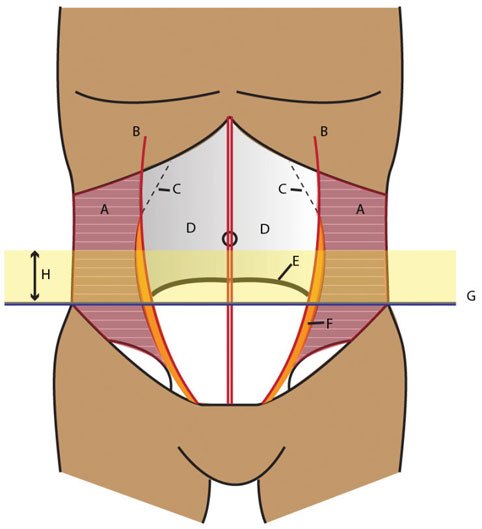 Depicted by the curved, dashed line, the linea semilunaris, or semilunar line of Spieghel is defined by the site of transition from the aponeurotic portion to the muscular portions of the transversus abdominal muscle.

The Spigelian aponeurosis (orange), represents a specific portion of the aponeurosis of the transversus abdominal muscle, which is bordered laterally by the linea semilunaris, or semilunar line of Spieghel, and medially by the lateral edge of the rectus muscle.

Following the semilunar line of Spieghel cranially, it should be noted that the line curves medially, behind the rectus muscle. Therefore, there can be no Spigelian aponeurosis in this area.

The interspinal line (blue), is a line connecting the 2 anterior superior iliac spines. This line marks the lower border of the Spigelian hernia belt (yellow band).

The Spigelian hernia belt is a roughly 6 cm tall zone across the anterior abdominal wall extending upward from the interspinal line. Approximately 90% of all Spigelian hernias will occur within this belt. 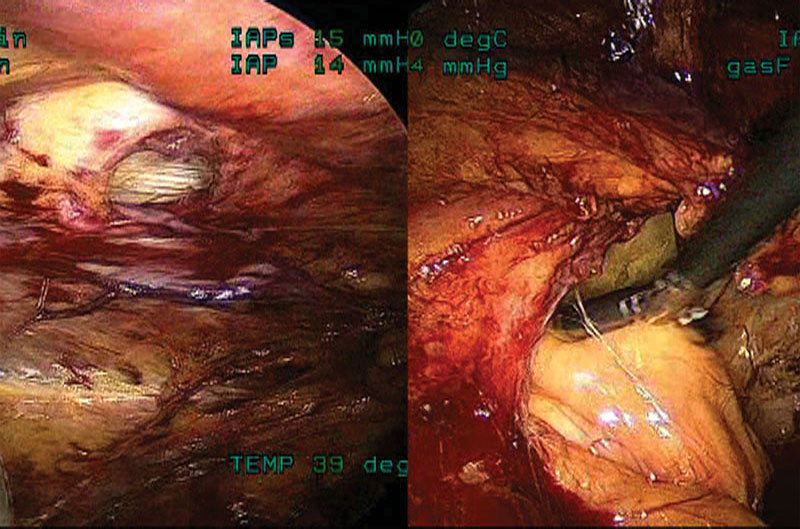 In this instance, hernias which penetrate the Spigelian aponeurosis will quickly penetrate the internal oblique layer. The adjoining layer between the two oblique muscles is loose and easily separated, and Spigelian hernias enlarge easily within this space.4 This may place the center of the mass of these hernias off axis from their origin, making them difficult to diagnose and reduce. The external oblique muscle is dense and aponeurotic ventral to the Spigelian aponeurosis along the entire length of this aponeurosis. Spread of Spigelian hernias through this layer into the subcutaneous tissues is, therefore, rare.

These hernias present most commonly with pain or discomfort. As these hernias most frequently remain behind the external oblique muscle, a distinct mass may or may not be present by palpation or visualization. Their intramuscular location and irregular course may make them difficult for the patient to reproduce with straining or Valsalva maneuvers. When a mass is present, these same characteristics may make them difficult to reduce. Up to 98% of these hernias are interparietal hernias and do not present with a bulge.11

Pain or discomfort, with or without a palpable hernia mass, located within the Spigelian belt should cause suspicion for a Spigelian hernia. Since other diseases may arise within this anatomic region, such as sigmoid diverticulitis, cancers of the right or left colon, or other intra-abdominal conditions, the diagnosis by physical exam alone may be difficult. This may be particularly true if an irreducible Spigelian hernia is present. Ultrasound may be used to aid in the diagnosis.

A CT scan of the abdomen and pelvis, however, remains a more useful diagnostic modality.4 This test provides an accurate view of the anterior abdominal wall structures. It is also highly sensitive for detecting intra-abdominal mass lesions in this area.

In Figure 4, notice the colon, marked by the arrow, as it passes through the Spigelian fascia just lateral to the left rectus muscle and becomes entrapped below the external oblique fascia. More inferiorly on the CT scan, in Figure 5, the internal oblique and transversus abdominis muscles can also be seen deep to the hernia, near the iliac crest. 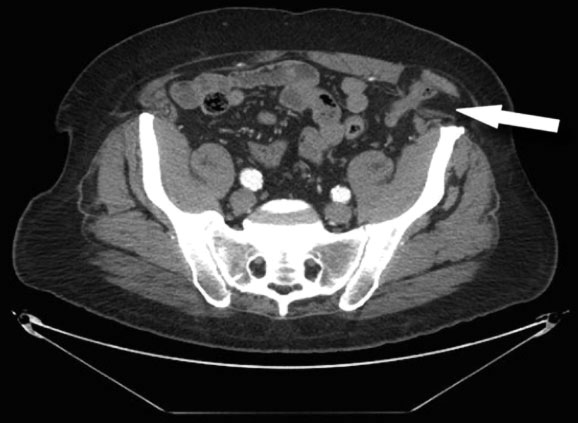 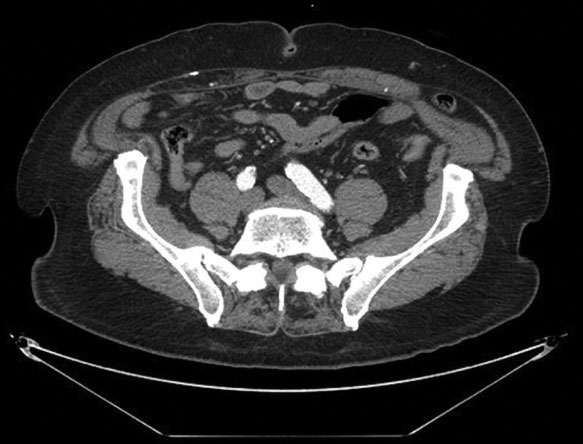 For patients with pain and discomfort and a reducible mass located above the level of the anterior superior iliac spine, lateral to the rectus muscle, and below the umbilicus, the diagnosis of a Spigelian hernia becomes likely. This diagnosis can be confirmed at the time of hernia repair by intraperitoneal laparoscopy, as demonstrated in our video.

Surgical repair of Spigelian hernias is recommended because of the high risk of incarceration (up to 24%)4 and strangulation (2.4 to 14%).12-15 Incarceration most commonly involves small bowel, colon, or omentum.16

Repair of Spigelian hernia has been described both open2,4,17-19 and laparoscopically,3,6,7,10,12,14,17,19-25 and both techniques have been reported with and without mesh. Laparoscopically, both preperitoneal and transperitoneal approaches have been described. In a review of 400 Spigelian hernias, 47% were repaired open with mesh, 40% open with sutures only, 7% using a TEP technique, and 6% with a TAPP technique.6 In a prospective, randomized trial of laparoscopic preperitoneal repair versus open repair with mesh, laparoscopy showed a significant advantage for the outcomes of morbidity and a length of hospital stay.17 Laparoscopy may be utilized, in experienced hands, for urgent or emergent repair of Spigelian hernias. Laparoscopic repair of incarcerated Spigelian hernia has been reported to be both feasible and safe.23 Recurrence is low for both open and laparoscopic repair. Primary repair recurrence was reported as 4.3% at an average of 3 years of follow-up, with a mean follow-up of 8 years based on 70 patients treated between 1976 and 1997.19 Mesh and laparoscopy had no recurrences, and specifically TAPP had no recurrences at an average of 40 months (with a range of 3-96 months), but this was based only on 8 patients.8 The addition of mesh has resulted in no current reports of recurrence utilizing this technique.26 We present here our technique for laparoscopic, preperitoneal approach to the repair of Spigelian hernias utilizing mesh.


This marks the end of the partial sample chapter